Despite all the shifts and outright changes industry has undergone in the past 18 months, attitudes toward lift truck acquisition and usage have remained relatively steady. That’s at least somewhat reassuring in a time of so much change.

Both surveys were the annual Modern Materials Handling “Lift Truck Acquisition and Usage Study.” They were conducted for Modern by Peerless Research Group. This ongoing series of annual surveys of our readers provides the industry with a baseline for trends in lift truck acquisitions and use.

For instance, the number of trucks in fleets didn’t fluctuate much between 2020 and 2021. Those companies with 100 or more trucks in their fleet stayed steady year to year at 12% of survey respondents. The largest segment here, those with three to nine trucks, rose from 32% of companies to 36%.

Meanwhile, the average age of trucks in fleets last year was nearly eight years and the age of the oldest truck was 14 years. Both numbers increased by only a single year in 2021, about what you might have expected.

Readers said purchase price, quality of trucks and safety remained the three most important characteristics when evaluating which trucks to buy.

That’s the top line summary of recent activity in lift truck acquisitions and usage. From here, we drill down to the story behind that story. 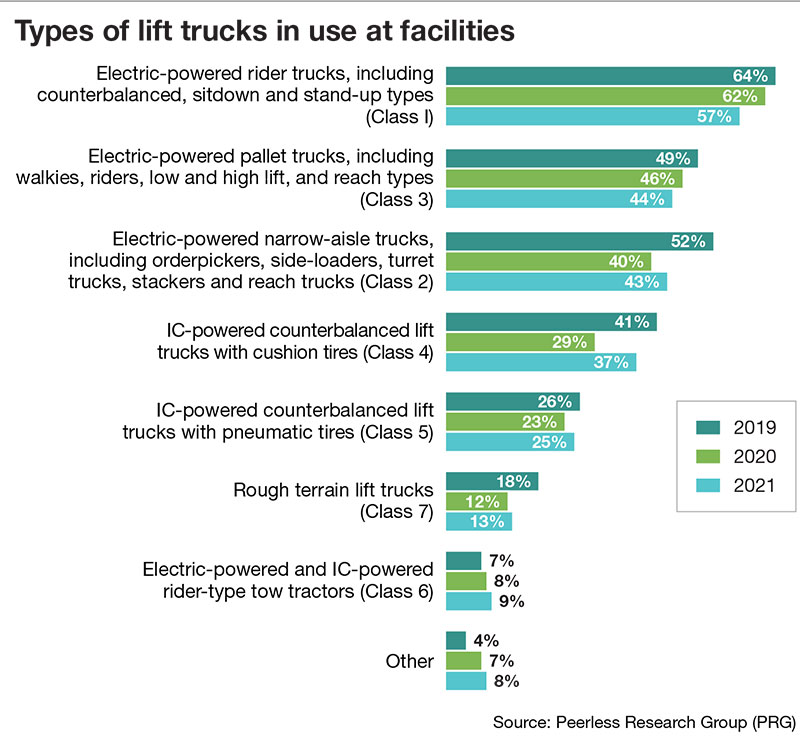 Perhaps most importantly, the specifics of the survey offer some insights into how your peers are managing lift truck fleets in these times.

Survey respondents in the 2021 survey described the primary activity at their location as manufacturing (39%), distribution (32%) and warehousing (22%). The average number of employees at those companies is nearly 300 and average revenue is just more than $500 million.

In other words, survey respondents are fairly evenly spread across the major activities of industry and are of a substantial size. But as you read through this report, you’ll see that smaller companies are also represented here, making the survey a strong indicator of actual lift truck buying and usage trends.

So many trucks to count

It’s also worth noting that 45% of respondents to this year’s survey say they operate a core fleet of trucks. In contrast to that, 55% rely primarily on a less-utilized reserve fleet. That’s another way of saying lift trucks are central to materials handling at 45% of those companies. That’s impressive.

As the chart shows, there have been some fluctuations in the past 24 months in the relative popularity of these and other truck types. But nowhere is there a pronounced shift from one type to the other. The largest shift here is in internal combustion counterbalanced trucks with cushion tires (Class 4). That moved from 41% in 2019 to 29% last year and back up to 37% this year.

The survey included a question about the adoption of autonomous and semi-autonomous forklift technology. It’s no surprise that the numbers are fairly small, coming in at 14% in this year’s survey. In 2019, that number was 21% and last year at 19%.

Despite those numbers, the use of semi-autonomous and autonomous lift trucks is probably not bouncing around that much. Instead, the number should be used as a general indicator of lukewarm buying activity at best as this technology continues to evolve. And it’s certainly a number to watch in coming years.

As was said earlier, fleet size has remained stable. The average fleet size in the 2021 survey is 27 trucks, exactly the same as last year and an increase of one from 2019 levels. The chart shows a breakout of lift truck fleet size from more than 100 to fewer than three. It’s worth noting that 54% of companies have fleets of nine trucks or fewer.

Looking forward, 64% say they plan to buy or lease lift trucks in the next 12 to 24 months. That’s a notable increase from 2020 survey results when 51% had plans to buy or lease in that same time period. Which, if you think about it, was an especially strong number given the grips of Covid a year ago.

The average number of trucks expected to be acquired in the next 12 to 24 months continues to sit at just over seven. Fifty-five percent of acquisitions are an addition to the fleet while 45% are a replacement. On average, trucks are replaced every 7.3 years, a few months less than the 7.7 years in both 2020 and 2019. See the chart for more details. Interestingly, 39% of respondents hold on to or store replaced lift trucks “just in case we need them.”

Spend on replacement parts is important, too. As the chart shows, wheels and tires lead the way with batteries and their accessories following up.

Respondents were also asked for their reasons the economy has a “great impact” on lift truck acquisition decisions.

As would be expected, the dominant response was a variation on: “if the economy is good, we purchase equipment.” But there’s more to their thinking than just that.

Time and again, stories in Modern have reported on the heightened level of activity recently, especially in warehousing and distribution. And that has affected decision making regardless of the state of the economy.

As one respondent said, “when we have a lot of work, it requires more trucks to ensure proper delivery.” Or put another way, our specific “business demands dictate purchases.” Perhaps the best summary was “our need for forklift trucks is driven by how our business is doing.”

Then there’s the matter of when the economy has “no impact” on lift truck decisions. These range from “equipment is essential to operating the business” to “we purchase by necessity,” and “we identify our needs and proceed from there.” Perhaps the most colorful response was “we run them into the ground then need to replace them to keep operations running.”

Who buyers work with

From buy/lease to maintenance and training, companies rely on a web of specialists to meet their lift truck needs. 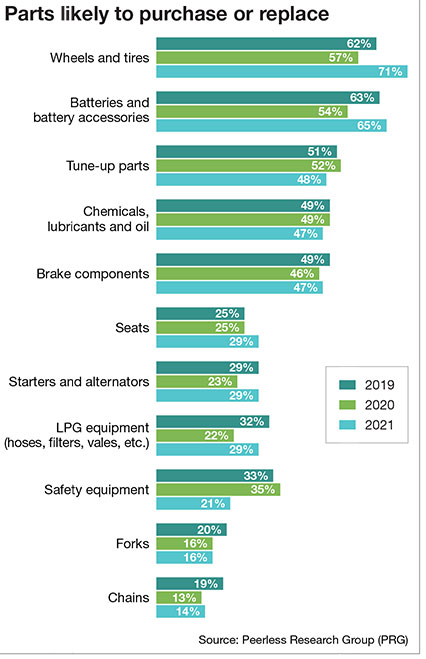 For instance, lift truck dealers continue to dominate sales. Eighty-six percent of respondents buy or lease direct from dealers while 24% work directly with lift truck manufacturers. Clearly, some companies out there use both channels.

The buy/lease decision is almost exactly evenly split with 51% purchasing trucks and 49% leasing.

As was said initially, price (75%), quality (72%) and safety (67%) are the three characteristics considered most important when companies make their buy/lease decisions. Next on the list is the cost to run the truck over its lifetime (55%), parts availability (53%) and service response time (46%).

That said, don’t underestimate the importance of the company’s relationship with its local dealer. Thirty-nine percent of respondents ranked that characteristic highly. Financing options (20%) are also important. Mixed in here is specific performance and productivity features (35%) and breadth of features (14%).

Of special note is the importance of green/environmentally friendly lift trucks. Only 17% say that is an important consideration when buying or leasing. In a world where electric trucks account for 60% of sales, the industry has already turned the corner on the importance of green and just doesn’t give it as much overt thought as others do. No one would have expected lift trucks to be a leader in green, but they are and have been for some time.

A question was also asked about servicing and maintaining lift trucks. Just over half outsource to the dealer with 29% relying on in-house staff. Nearly 20% outsource to a maintenance/service contractor.

When it comes to training of operators, the preference is clearly to internal programs. In fact, 85% of companies go that route, and have in all previous surveys, too. Only about 14% rely on dealers and barely more than 10% on independent service providers.

So there you have it, another year of trends in lift truck acquisition and use. If there is any central theme, it’s this: Keep doing what you’re doing as long as your trucks provide sufficient support for your business needs. That approach works for your competition and other peers.