SEOUL, Dec. 25 (Yonhap) -- Flight cancellations and delays, which have been caused by thick fog, continued to plague travelers at Incheon International Airport on Monday for the third consecutive day, officials said.

As of 1 p.m., 280 flights were delayed with two cancellations, although airport operations have already returned to normal after the fog cleared up on Sunday, the airport authorities said.

"The 280 delays were caused by schedule rearrangements triggered by cancellations on Dec. 23-24," an airport official, who declined to be identified said. "Right now, there are no delays due to the fog, and the two cancellations are due to no reservations."

Some 1,000 flights were delayed or canceled during the two-day period because of bad weather that started affecting the airport's operations on Saturday. 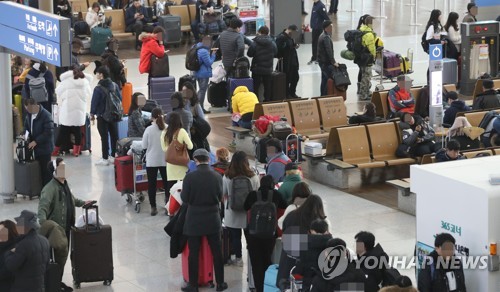