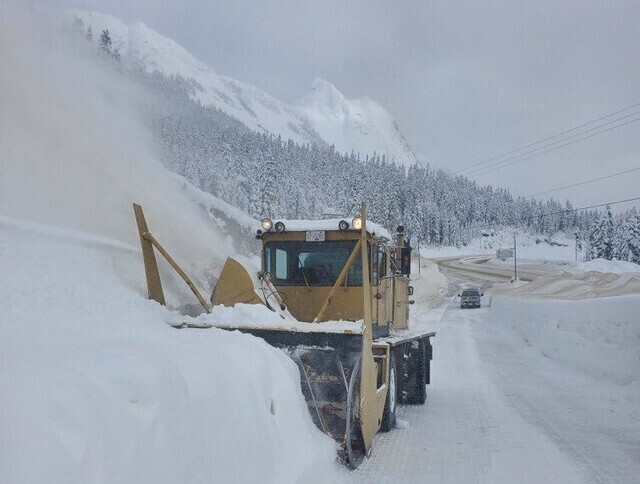 Late season snow could impact some long weekend travellers in the B.C. Interior.

Environment Canada has issued special weather statements for Rogers Pass on the Trans-Canada Highway, as well as Kootenay Pass and Paulson Summit on Highway 3.

Light snow is forecast to begin late Monday afternoon and taper off Tuesday afternoon for Kootenay Pass and late Monday evening for Rogers Pass. Up to 15 centimetres is possible in some areas.

The snowfall could hit right as some people are coming home to B.C. from Easter road trips to visit family and friends in other provinces.

Anyone returning on Highway 1 should also be aware that Kicking Horse Canyon is set to close again on Tuesday at noon after construction closures were halted for the long weekend.
If you miss the deadline, you’ll have to take the longer route along Highways 95 and 93.

#BCHwy1 east of #GoldenBC at #KickingHorseCanyon Phase 4 is fully open for the Easter Long Weekend until Tues (April 19) at noon.
Then it's closed until the Victoria Day Weekend.
Plan for an additional 1.5 hrs travel time on the Hwy 95/93 alternate route: https://t.co/53UZ0t4YZy pic.twitter.com/yqMR8EfAED

Kicking Horse Canyon will again open for the Victoria Day long weekend in May, and then there will be no daytime stoppages due to construction from June 1 to mid-September.